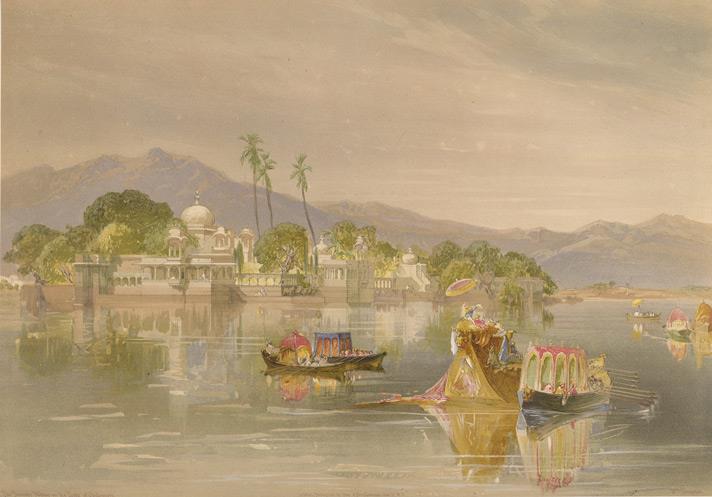 Digital Rare Book:
Handbook of MEYWAR and guide to its principal objects of interest
By Fateh Lal Mehta
Printed at The Times of India Steam Press, Bombay - 1888

This chromolithograph is taken from plate 6 of Wiliam Simpson's 'India: Ancient and Modern'. Udaipur was the seat of the Sisodia Rajputs who ruled the princely state of Mewar in Rajasthan. Simpson thought the city "extensive and beautiful ... its situation and the character of its buildings rendering it by far the finest city in India". He depicts a pretty scene of royal boats and the Jagmandir Palace on Lake Pichola. The palace was built by Maharana Karan Singh on an island in the lake in the early part of the 17th century. Constructed from white marble inlaid with mosaic, its beauty was complemented by its reflection in the lake. Karan Singh offered refuge here to Prince Khurram (later to become Emperor Shahjahan) and legend has it that the palace inspired the Taj Mahal.

What a beautiful, beautiful painting. Should love to see that 'in the flesh'!

Yes, the Pichola and this Jagmandir are a exquisite place to be, if you get a chance try spending a few days at Jagmandir.

hope they've done something about the pigeons. When I was there the p. droppings took something away from the glamour

They were mostly gone a year or so back.