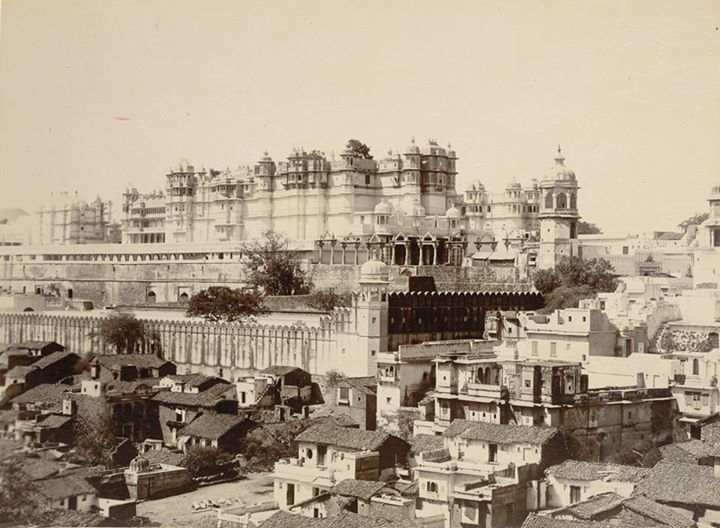 Photograph of City Palace from the 'Reading Collection: Views of Udaipur taken by an unknown photographer c.1910. The photograph is part of an album containing architectural and topographical views of sites in Rajasthan, mainly of Udaipur, originally in the collection of Rufus Daniel Isaacs, Lord Reading, who served as Viceroy of India (1921-1926).

Udaipur was chosen by Maharana Udai Singh (r. 1567-72) of the Sisodia Rajputs as the new capital of the Mewar State in the mid-16th century and he built theCity Palace (c.1570 onwards) as the main royal residence. It is a fortified palace composed of a colossal series of buildings faced in white plaster. Beyond the battlements, its steep windowless exterior walls rise to meet tiers of delicate balconies, towers and domed kiosks at the upper levels.

Wow..thanks for sharing. .my ancestral home called mama ji ki haveli is on the way to the city palace. I get a picture of how it would have looked back in those days. Cheers. Great work.

my mothers last name is khajepour, it could be spellt khajaipur, maybe it is indian in heretage?

good old photograph.now you cant even see the palace walls