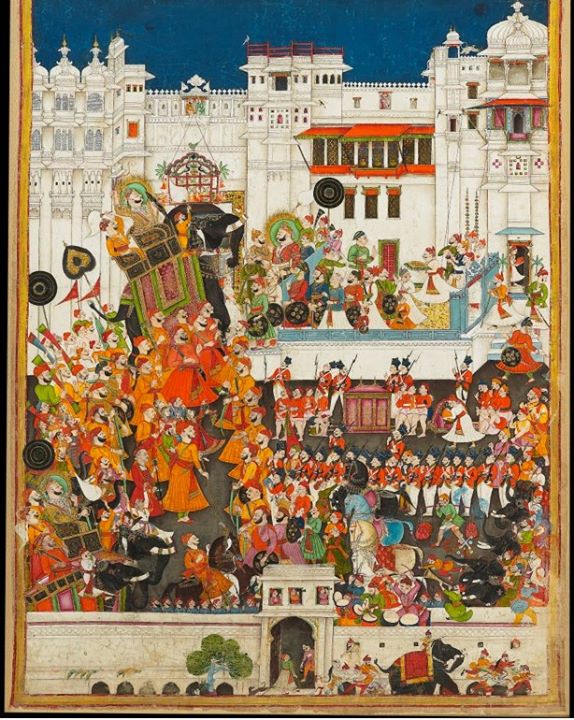 Maharao Ram Singh, seen twice in his elephant howdah, arrives at the Udaipur palace for his marriage to the sister of Maharana Sarup Singh, who stands with courters waiting to greet him on a terrace in front of the palace. Whip and shield in hand, Ram Singh then rides forward to strike the symbolic torana arch suspended over the zenana (harem) gateway, prior to claiming his bride.

I have a few of the Udaipur palace paintings in this style, I can buy the entire lot that has even been made and still not be satisfied. Along with the Daniells, thats going to have to make for a really large living room.

Here is a present day image of the same portion of the palace depicted in the painting. This comparision allows us to appreciate how well the artists played with proportions to help enhance the depiction of the respective event :) . http://www.fullstopindia.com/wp-content/uploads/2010/04/City-Palace-Udaipur-Rajasthan-India.jpg

Indeed Mr.Satyakam Sudershan! The finest examples of miniature paintings would have occupied the pride of place in the royal collections of the patron-kings. Particularly so of Bundi and Kota- two small kingdoms which achieved exceptional standards in this art form. The reason is actually historical- the royal family of Bundi became chieftains under the Mughals and were posted among other places at Chunar near Benaras. Thus the painters working for these royals picked up the skills and techniques of the painters of the Mughal atelier. Infact the famed Chunar Ragamala bears great resemblance to the wall paintings in Bundi Palace which can be seen and compared to this day! Thus Kota and Bundi maintained a style somewhat distinct from the other larger Rajasthan schools. About Udaipur palace paintings, we are happy to be able to offer connoisseurs some fine examples from Udaipur also.