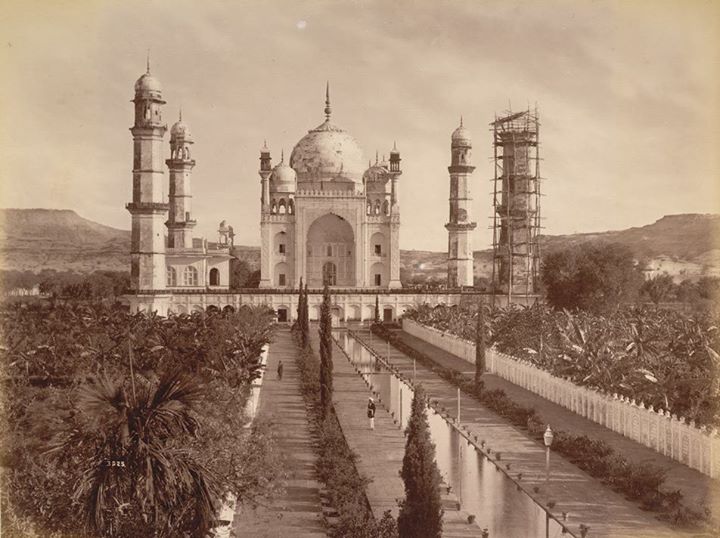 Photograph of the Bibi-ka-Maqbara, or Queen's Tomb, in Aurangabad, taken by Deen Dayal in the 1880s, from the Curzon Collection: 'Views of HH the Nizam's Dominions, Hyderabad, Deccan, 1892'. This tomb, built in 1678, is the most well known building in the city. It was built by Prince Azam Shah in memory of Rabia Durani, wife of the Mughal Emperor Aurangzeb (r.1658-1707). It was designed by the architect Ata Aula as an imitation on a reduced scale of the Taj Mahal at Agra. However, although it is an impressive building with fine surface ornament, it is inferior to its model in every respect. The mausoleum is situated in the centre of a walled enclosure with a garden surrounded by a crenellated wall with bastions. It is a square building covered by a huge marble dome with four corner minarets.

RBSI how many people know that there is also a Taj Mahal in Bhopal which lies in total neglect? I can share its pictures

History is very controversial. Aurangzeb arrested Shahjahan because he believed his father wasted exchequer in constructing monuments etc. But it is strange enough how Aurangzeb got this mausoleum built...?

Bibi ka makbara was built by Aurangzeb's son to commemorate his mother. In persian Bibi means mother not to be confused with biwi in urdu.

This is the correct URL for 'Taj Mahal of Bhopal' by Sameer Khan: http://sameerspen.wordpress.com/