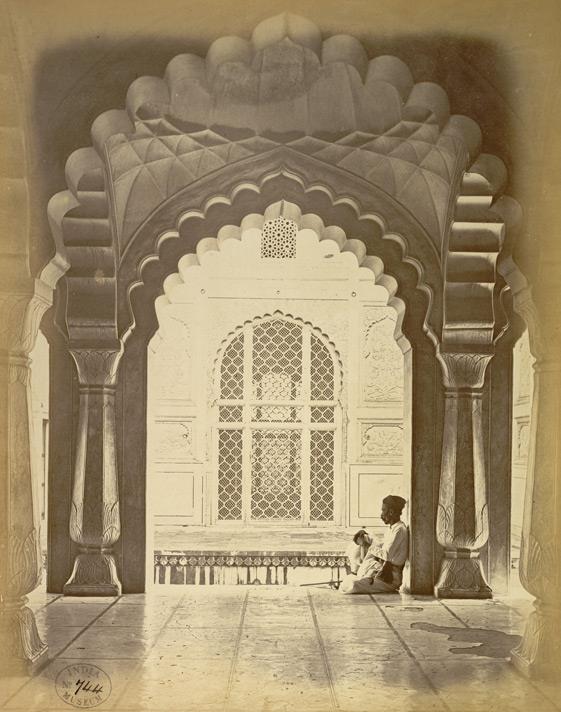 View of screen of the Bibi-ka-Maqbara from the neighbouring verandah, Aurangabad - 1868

Photograph of the screen of the Bibi-ka-Maqbara at Aurangabad in Maharashtra, from the Archaeological Survey of India Collections, taken by Henry Mack Nepean in 1868. This tomb, built in 1678, is the most well known building in the city. It was built by Prince Azam Shah in memory of Rabia Durani, wife of the Mughal Emperor Aurangzeb (r.1658-1707). It was designed by the architect Ata Aula as an imitation on a reduced scale of the Taj Mahal at Agra. However, although it is an impressive building with fine surface ornament, it is inferior to its model in every respect. The mausoleum is situated in the centre of a walled enclosure with a garden surrounded by a crenellated wall with bastions. It is a square building covered by a huge marble dome with four corner minarets. The white marble is inlaid with moulded stucco plaster instead of semi-precious stones as at Agra. This is a view looking towards the screen that surrounds the grave, showing one of the pierced stone windows, and framed by the cusped arches of the verandah in the foregound.

It's Huge, It's beautiful But It cant take mark on your mind...pity