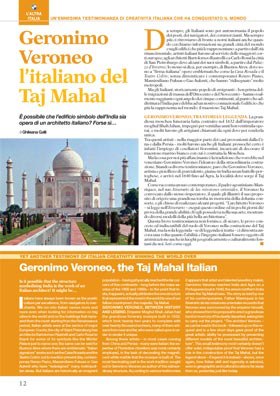 YET ANOTHER TESTIMONY OF ITALIAN CREATIVITY WINNING THE WORLD OVER. Is it possible that the structure symbolising India is the work of an Italian architect? It might be...

Italians have always been known as the poetic culture par excellence, from navigators to merchants. We run into Italian names more and more even when looking for information on big cities in the world and on the buildings that represent them the most: starting from the Renaissance period, Italian artists were at the service of major European Courts; the city of Saint Petersburg has architects Bartolomeo Rastrelli and Carlo Rossi to thank for some of its symbols like the Winter Palace just to name one; the same can be said for Buenos Aires where there are emblematic "Italian signature" works such as the Casa Rosadaand the Teatro Colón; not to mention present day, contemporary Renzo Piano, Massimiliano Fuksas or Gae Aulenti who have "redesigned" many metropolitan areas. But Italians are historically an emigrant population – having physically reached the far corners of five continents – long before the mass exodus of the 1800 and 1900s – to the point that India, it appears, actually attributes the one structure that represents it the most in the world to one of our fellow countrymen: the majestic Taj Mahal.

There is always some difference in Theory and Practice!

Interesting theory but possible because the king (forgot his name now) built that "love palace" for his beloved and then deceased wife and he only wanted the best people. He also had the resources to get them and there were already contact at that time between India and the mediteranean world.

The Taj is the perfect jem of the Indian Islamic archetecture,the culmination of a rich tradition started by the Turko-Afgans nearly four ceturies back.Any talk about The Taj being a modified temple ora work of Italian imagination smacks at best sheer charlatany;at worst, malice,colonial hang-over and a develish distortion of facts..