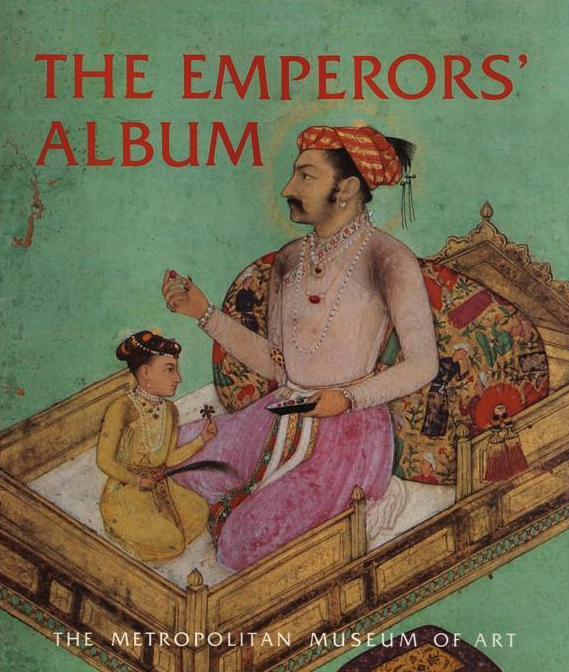 
The Emperors' Album: Images of Mughal India is a landmark publication. Here the fifty leaves that form the Kevorkian Album, one of the world's great assemblages of Mughal art and calligraphy, are presented together for the first time. Thirty-nine leaves date from the seventeenth century; the other eleven leaves were created in the early nineteenth century and were bound with the earlier ones, most probably by a Delhi art dealer. The resulting album took its name from Hagop Kevorkian, a noted benefactor of the Metropolitan Museum and of many other cultural institutions, who purchased it in London in 1929. Over the next decades nine of the leaves went to the Freer Gallery of Art in Washington, D.C., and in 1951 the remaining forty-one leaves came to the Metropolitan Museum. The seventeenth-century leaves include masterpieces of Mughal portraiture, superb natural history studies, and magnificent specimens of calligraphy. Commissioned by the great emperors Jahangir and Shahjahan, these works were meant for private enjoyment—images to be shared with delight by the imperial family and their close friends. These pictures were created in the imperial ateliers by the greatest artists of the day. In Stuart Cary Welch's introduction and in the texts he has written for each painting, these artists are identified, and the biographical information available for each is given. The influences that molded their works—the Persian and Deccani conventions that were so important in the development of the Mughal style—are discussed, as are the European elements, most notable in the floral borders, which show the impact of herbals brought to India by European missionaries and traders.

Welch's historical introduction is extended and expanded by the biographical essays Wheeler M. Thackston has contributed for the subjects of each of the portraits. Based on primary sources, these accounts are an invaluable overview of the Mughal world. But these great pictures make up only half the Kevorkian Album. As important are the calligraphic pages, which include specimens by major scribes, most especially Mir 'Ali. In her introduction Annemarie Schimmel discusses the paramount place accorded calligraphy in the Muslim aesthetic. She also assesses Mir-'Ali's accomplishments as a calligrapher and as a poet. The poetry in the Kevorkian Album is an anthology of the verses prized by the Mughal elite; in her comments on each of the leaves Schimmel identifies and translates this poetry. The rich borders of Mughal album leaves are extraordinary works of art in themselves. Marie L. Swietochowski's carefully argued introduction discusses not only the leaves from the Kevorkian Album but also those from the Minto and Wantage albums and from other sources. In her remarks on individual leaves from the Kevorkian Album, she comments on stylistic differences and provides identifications of plants, birds, and animals. The Emperors' Album is a book for scholar and lay person alike. Here the reader enters the heart of a civilization whose glories still shine forth, embodied in painting and script.

This is going to be such a treat. Or it would be if ever I had time for treats. I think that when I die, my biggest regret will be that I didn't have time to luxuriate in the wealth of material which RBSI puts before me. Maybe there's something to be said for growing old gracefully, and doing what I have heretofore been determined not to do, and that's sitting in a corner with a blanket over my knees - waiting for something to happen. Perhaps I should do that while still compos mentis, then I can read into the gloaming .....

Thank you Philippa! You speak for many of us who will agree with you. But then if we could only do a fraction of what you have done in your multi-faceted life...that would be quite exhilarating!

Ah! The famous Kevorkian album, exhibited in that famous exhibition at the Met in 1987, and the book co-authored by the famous scholar and collector, Stuart Cary Welch. That is a lot of fame in one post!

On a more specific note, the cover illustration is of Shah Jahan and his son Dara Shikoh. They are admiring jewels. This painting is illustration number 55 in the aforementioned book, and this is followed by an informative discussion of both the art and its iconography.