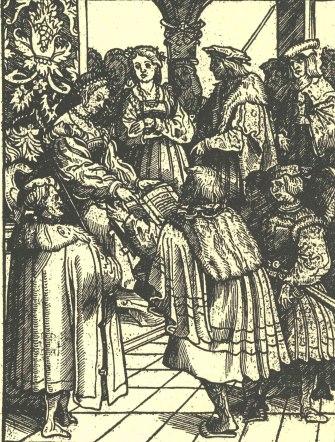 Since the time of Mohammed, non-Moslems have not been permitted to enter the holy cities of Mecca and Medina. To this day, only the followers of the Islamic religion are permitted to pass the stone gates which stand 15 miles outside Mecca. In spite of this ban (or perhaps because of it) a few adventurous travelers have risked their lives to visit the holy cities. Such travelers have left records which describe their journeys, the routes to and from Mecca and Medina, the local countryside and its inhabitants.
The first non-believer known to have visited Mecca and Medina was at Italian from Bologna named Ludovico di Varthema, who published a book of his travels in 1510. In this book, he describes his adventures in Egypt, Syria, the Hejaz, Yemen and subsequent journeys in India and the Moluccas.

The book tells us very little of his early life apart from the information that he lived in Bologna, and had probably been a soldier prior to his travels. He was not a learned man - he describes himself as of very slender understanding and he resolved to see things personally and with my own eyes, to endeavour to ascertain the situation of places, the qualities of people, the diversities of animals, the varieties of the fruit-bearing and odoriferous trees - remembering well that the testimony of one eyewitness is worth more than ten thousand hearsays.

He left Europe toward the end of 1502, and in early 1503 arrived at Alexandria in Egypt. From there, he made his way up the Nile to Cairo and then returned to Alexandria from where he sailed to Beirut, then on to Tripoli, Aleppo and reached Damascus in April 1503. There he managed to get himself enrolled, under the name of Yunas (Jonah), in the Mameluke garrison.

At that time, the Mamelukes, from whose ranks the escorts for the pilgrim caravans were drawn, ruled over Egypt and Syria. Originally, they had come to Egypt as prisoners of war from Europe and southern Russia (Circassia) and had been converted to Islam. The Mamelukes gradually rose to power through government service before seizing control of Egypt in 1250. Although they were Moslems, and could therefore make the pilgrimage to Mecca, they did not necessary look like Arabs, and this is no doubt why di Varthema sought to join their ranks, since, as a member of the Mameluke guard, he could join the pilgrimage with little fear of detection.

And of course the French Commandos of the GIGN during the Siege of '79.

The exception was when, for a brief period, Britain ruled Arabia and Imperial Kaafirs freely explored and painted Mecca and Medina and conducted a study of the Kaaba.. (Note: The Mamelukes were orphans of the "Franks" seized in war and brought up as Moslem Warriors)