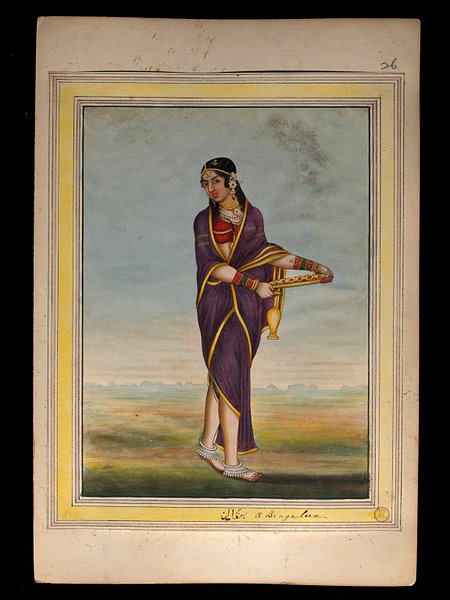 A Bengali woman going to worship with flowers and water.
Lucknow, 1815.

The lady is not wearing the saree in typical Bengali style but this is more a mix between Hindustani and navvari. A lot of Bengalis used to inhabit Awadh plains, Brajdham, Kashi and Bihar and their descendants are still there speaking a form of Sadhu style Bangla and Hindi. Some don't even speak Bengali.Some of the prominent zamindars like that of Kandi Paikpara, Hetampur, Cossimbazar, Dighapatia, Pabna Tarash had built big temples in Braj dham and Kashi with having their vacation homes in Giridih and other places of Southern Bihar, now Jharkhand. But now all gone or on its way out.

Though this depicts a woman far removed from purdah, I suspect sari petticoats, as we know them, were a Victorian invention. Maharani Suniti Devi of Cooch Behar wrote that she had to wear her sari over a full dress at Victoria's court.