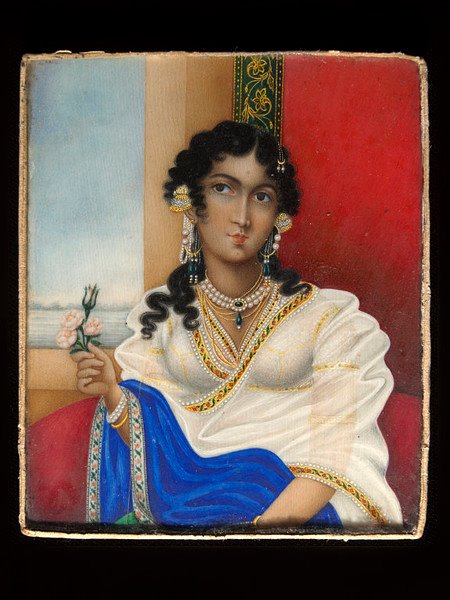 Painting; Watercolour on ivory, An Indian lady seated by a window against a red blind and holding a flower, Delhi, ca.1860.

Slight mistake in the Geography, I think.

No, this is typical late Mughal dressing style. If you have visited the old Delhi and the interiors of the still existing havelis, you will see lot of oil paintings of that era have survived even today . The descendants have retained them. . If you have a look at those portraits, you will see the ladies in almost similar style and fashion.

I agrre. The background, including the blind and the red upholstery is of late 19thc. I wonder was this woman a part of the 'bibi' culture (married to a British/Anglo-Indian) men? She is holding 3 flowers with a bud, which is rather unusual.

Why was painting on ivory so cool back then

Sita Shahane: You have raised an interesting point! A quick research immediately throws up these links: Paintings on ivory: Ivory came into popular use as a painting support in the 18th and 19th centuries as part of miniature-painting traditions based largely in Europe and the United States. The naturally translucent material was well suited to the luminous techniques of portrait painting. Derived from the tusks and large teeth of elephants, walruses, and whales, ivory is composed of both organic and inorganic constituents of dentine. However, its porous and hygroscopic qualities render it vulnerable to many agents of deterioration. Ivory, especially in thin layers, responds with dimensional changes to fluctuations in the moisture content of the air. Miniature paintings on ivory are particularly vulnerable, expanding and contracting across the grain in a manner similar to paintings on wood (see Paintings on wood, above). The conservation of ivory paintings depends to a large extent upon maintaining stable environmental controls, in the optimum region of 50–60 percent relative humidity, with the temperature not exceeding 70 °F (21 °C). At lower levels of relative humidity, paintings on ivory desiccate, shrink, and crack, especially if constrained. Relative humidity above about 68 percent promotes expansion and warping; cyclical fluctuations also place severe stresses on the paint media. Read more: http://bit.ly/OUm3CQ

The art of miniature painting on ivory By Arthur Parsey Read and download pdf: http://bit.ly/RP6r1Y

Three flowers and a bud is symbolic

I agree with tareha. She could be one of the wives or children of the white nawabs. This style came post company- style period. Could be around late 18th c.