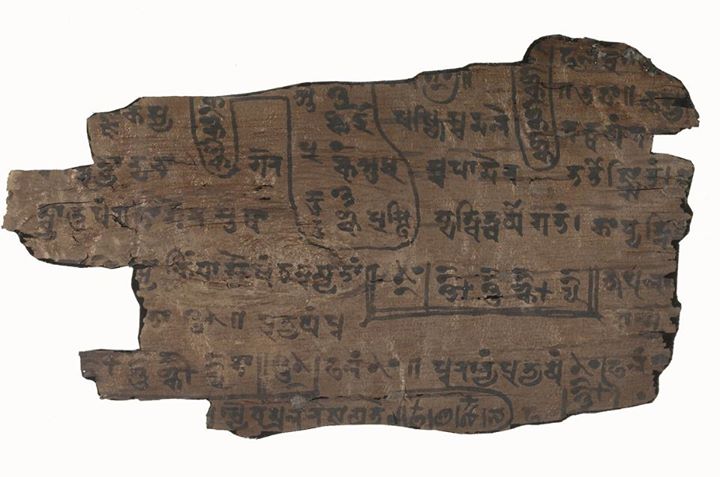 The Bakhshali Manuscript is an early mathematical manuscript which was discovered over 100 years ago. We shall discuss in a moment the problem of dating this manuscript, a topic which has aroused much controversy, but for the moment we will examine how it was discovered. The paper [8] describes this discovery along with the early history of the manuscript. Gupta writes:-

The Bakhshali Manuscript is the name given to the mathematical work written on birch bark and found in the summer of 1881 near the village Bakhshali (or Bakhshalai) of the Yusufzai subdivision of the Peshawar district (now in Pakistan). The village is in Mardan tahsil and is situated 50 miles from the city of Peshawar.

An Inspector of Police named Mian An-Wan-Udin (whose tenant actually discovered the manuscript while digging a stone enclosure in a ruined place) took the work to the Assistant Commissioner at Mardan who intended to forward the manuscript to Lahore Museum. However, it was subsequently sent to the Lieutenant Governor of Punjab who, on the advice of General A Cunningham, directed it to be passed on to Dr Rudolf Hoernle of the Calcutta Madrasa for study and publication. Dr Hoernle presented a description of the BM before the Asiatic Society of Bengal in 1882, and this was published in the Indian Antiquary in 1883. He gave a fuller account at the Seventh Oriental Conference held at Vienna in 1886 and this was published in its Proceedings. A revised version of this paper appeared in the Indian Antiquary of 1888. In 1902, he presented the Bakhshali Manuscript to the Bodleian Library, Oxford, where it is still (Shelf mark: MS. Sansk. d. 14).

A large part of the manuscript had been destroyed and only about 70 leaves of birch-bark, of which a few were only scraps, survived to the time of its discovery.

M N Channabasappa (1976). "On the square root formula in the Bakhshali manuscript" http://bit.ly/NqRtwD