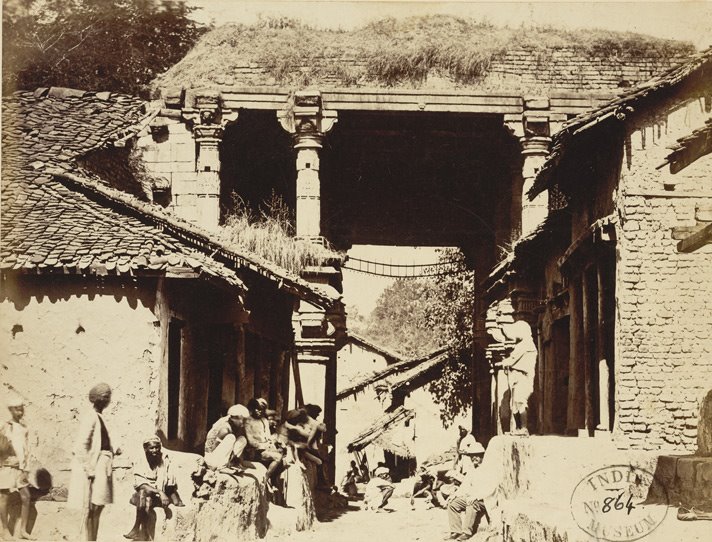 Photograph of a gateway in Ujjain, Madhya Pradesh, taken by George Edward Herne in 1869. This view looks along a street towards the gateway, which was supposed to have been built by the legendary ruler Vikramaditya, with Indians and a European posed in the foreground. Ujjain is one of the seven sacred cities of the Hindus and is a well-known place of pilgrimage. Built on the banks of the river Shipra it was once the centre for astronomical research and where the meridian was fixed for calculations. The city has many archeological sites of great interest as well as Hindu temples and an 18th Century observatory consisting of five monuments used for celestial calculations. Vikramaditya, the famous ruler, held court at Ujjain, surrounded by scholars and poets.

Ujjain is home to many temples since time immemorial. One of the 51 Satipeeths are in Ujjain. Also Mahakaleshwar, regarded as foremost of all Jyotirlingas is also there. It was believed that the center of the earth passes through Ujjain in ancient Hindu astronomy. Ujjain is also famous for Kalbhairav temple where alcohol is offered as prasad to God. Strange is the stone deity will drink the entire alcohol through the hand of priest when offered infront of you. Many British excavations had been conducted in and around the temple but no scientific reason has been found. It is also home to the famous Vikram - vetaal legend.Ujjain is also regarded as the place of birth of the planet Mars. There is Mangalnath temple on the banks of Shipra which is a Shiva temple and people with Bhoumadosh conduct Pujas to get rid of mal effects of Mars. Beside the famous Navagraha temple on the banks of Shipra is said to be very important to curb astrological bad effects of horoscope.