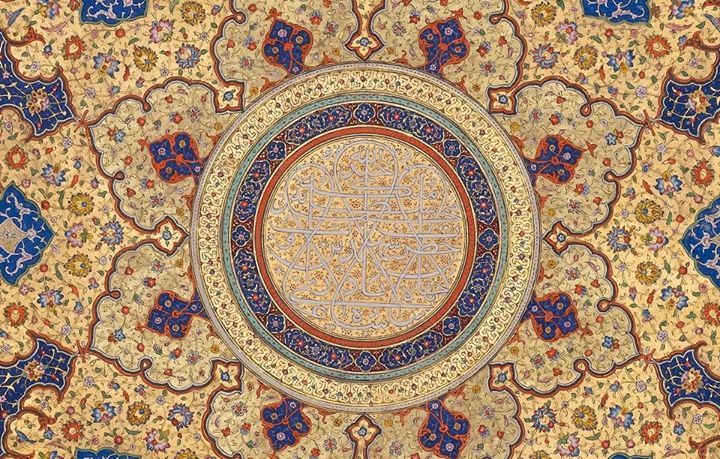 "Rosette Bearing the Names and Titles of Shah Jahan", Folio from the Shah Jahan Album - 1645 AD

A shamsa (literally, sun) traditionally opened imperial Mughal albums. Worked in bright colors and several tones of gold, the meticulously designed and painted arabesques are enriched by fantastic flowers, birds, and animals. The inscription in the center reads: "His Majesty Shihabuddin Muhammad Shahjahan, the King, Warrior of the Faith, may God perpetuate his kingdom and sovereignty."

For an extra-large HD image:

I had a poster of this image, once upon a time.

I'd love to have a rug like this - obviously somewhere the dogs couldn't get to it . . .

i would love to see mumtaz s bookplate..lol

come on.. :-) I am sure she must have been so beautiful

I love the colors they are so vivid

What painstaking nd exquisite work! For the Grand Mogul!

beautiful!!so pleasing to the eye.

does anyone have any knowledge of Jerdons book on Birds of South India published 1847??

What's it doing at the Metropolitan Museum of Art?