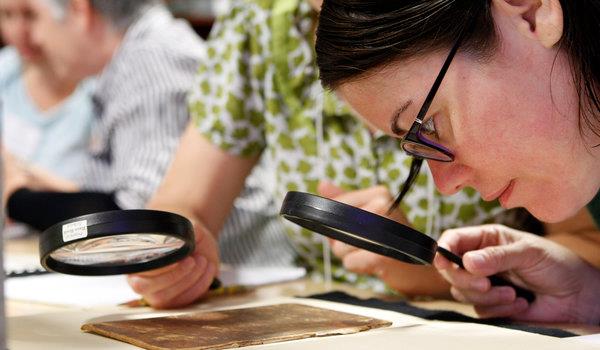 For five weeks each summer Rare Book School brings some 300 librarians, conservators, scholars, dealers, collectors and random book-mad civilians together for weeklong intensive courses in an atmosphere that combines the intensity of the seminar room, the nerdiness of a “Star Trek” convention and the camaraderie of a summer camp where people come back year after year.

Vic Zoschak, a retired Coast Guard pilot turned antiquarian bookseller from Alameda, Calif., took his first class in 1998 and has returned for 14 more. “Flying search-and-rescue missions was satisfying work,“ he said. “But here, I found my people.”

For many Rare Book School is an important networking opportunity, not to mention a chance to bunk in the Thomas Jefferson-designed lodgings that ring the university’s famous central Lawn, with their appropriately antiquarian lack of indoor toilets. But it also fills an important intellectual niche, teaching skills and knowledge that have been orphaned by increasingly technology-minded library schools and theory-oriented literature departments.

Bringing an understanding of the materiality of the book back into literary studies is something that Michael Suarez, an Oxford-trained specialist in 18th-century British literature and a Jesuit priest who took over as the school’s director in 2009, speaks of with an almost missionary zeal.

“A book is a coalescence of human intentions,” he said in a phrase often repeated around the school. “We think we know how to read it because we can read the language. But there’s a lot more to reading than just the language in the book.”

We have an original of Babur Namah in National Museum at New Delhi. I have seen it in a windowless air-conditioned room. But it is never out on display. Can you get them to show it to a private audience when you are in Delhi next? There are only two originals, one in Delhi and one in Hermitage at St Petersburg. If you can it would be wonderful.

I'd like to be part of that private audience.

This article is courtesy of Asad Ahmed's page.

I am truly delighted by the phrase "random book-mad civilians".