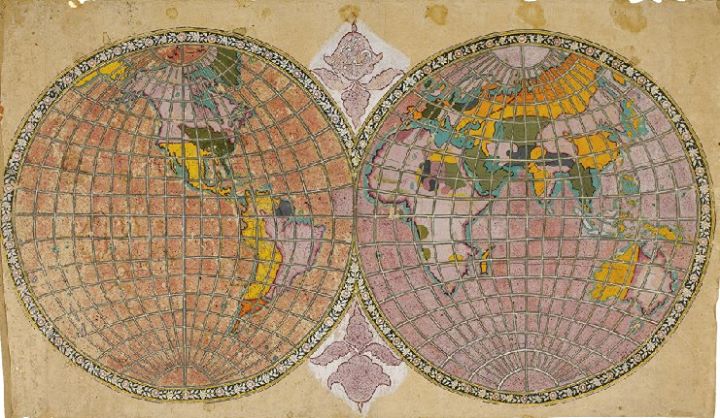 I wonder what the color scheme means? It doesn't seem to be in synch with political alliances of the period.

Unfortunately, the Sothebys site provides no further details. Maybe our experts have to come up with some interesting theories.

Does the color orange indicate the Anglo influence over the world?

The catalogue of Sotheby atttributes it to Jaipur, based on the style of painting and local interest in astronomy and astrology. The map was part of Stuart Cary Welch collection ...a self taught Indian and Islamic art aficionado. I think his book, 'Room for Wonder: Indian Painting During the British Period, 1760-1880'. American Federation of Arts, 1978 may have a clue or two of our map.

The color scheme is delightfully random, and the geography remarkably accurate for 1810. Whoever painted this clearly worked from one of the best available European atlases of the time.

Note that Britain is only half yellow, and that is the Scottish half. Also note that Russia (not an ally of Britain at the time), is also yellow, but with a demarcation line between European and Asian Russia. Portuguese territories in Africa are marked in green, but not Brazil or Mozambique. And why is Australia chopped in half like that? Why is mainland Southeast Asia green? Why are China and Madagascar yellow? Why is Argentina (alone in all the world) orange? It would be fascinating to know why these colors were chosen. Or perhaps this was colored in by a bored child? I remember scribbling myself in Atlases, as a kid, trying to improve on the aesthetics of the maps. :-)

I too tend to think the colours are probably decorative..

According to the catalogue it was based on the New Map of the world published 1808 london....there is a remarkable similarity between the two .....Agree with James W.Hoover colours are random ....maybe according to an artistic sensibility of a child.

The colours seem to demarcate areas very distinctly. It is doubtful that they are randomly filled for decorative effect. What exactly they indicate, perhaps remains to be identified.