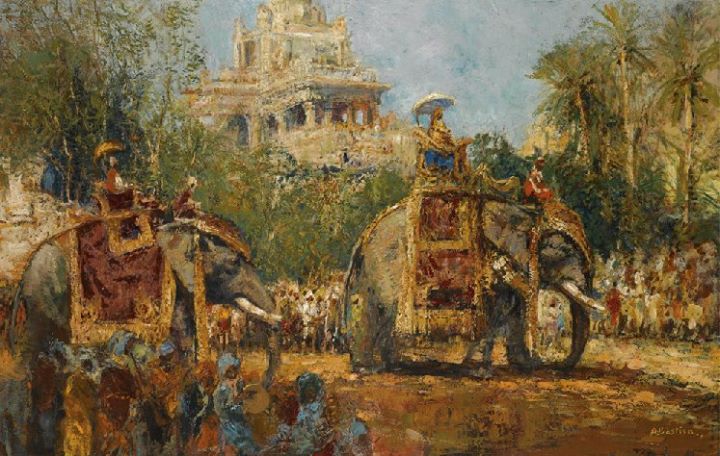 The Kingdom of Mysore was ruled by the Wodeyar dynasty from 1399 until the independence of India in 1947 and the subsequent dissolution of monarchy by the Indian constitution.

'Dussehra' is the main Hindu festival of Karnataka and traditionally lasted for about ten days. Today, this festival is still celebrated in Mysore with great pomp and show. The first six days are celebrated in the honour of the goddess Saraswati. The eighth day is dedicated to Durga and the ninth day to the goddess Lakshmi, the goddess of wealth. On the 10th day, a huge procession with decorated elephants begins at the Mysore Palace and ends at Bannimandap.

Alfred Bastien was a Post-Impressionist painter and watercolourist of landscapes, still lifes and portraits. He was a student of Jean Delvin at the Academy of Ghent and a student of Jan Portaels (lot 9) at the Academy of Brussels. He travelled on a scholarship to Paris in 1891, where he won the "Prix de Godecharle" in 1897. He travelled to North Africa, the Belgian Congo, India, Japan, China and the islands of the South Pacific, all of which inspired his work.