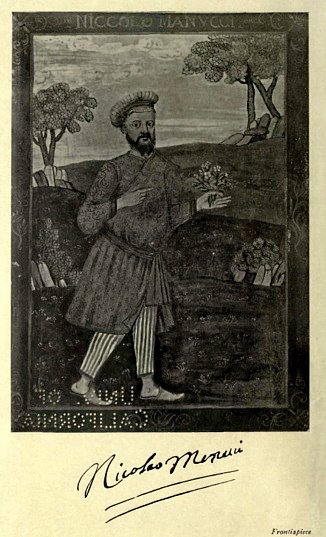 Digital Rare Book:
A Pepys of Mongul India, 1653-1708 : Being an abridged edition of the "Storia do Mogor" of Niccolao Manucci.
Translated by William Irvine
Published by E.P. Dutton & Co., New York - 1913

"Niccolao Manucci (1639–1717) was an Italian writer and traveller. He worked in the Mughal court. He worked in the service of Dara Shikoh [???????? ], Sh?h Alam, Raja Jai Singh and Kirat Singh. Storia do Mogor Manucci is famous for his work "Storia do Mogor", an account of Mughal history and life. Manucci had first-hand knowledge of the Mughal court, and the book is considered to be the most detailed account of the Mughal court. It is an important account of the time of the later reign of Sh?h Jahan and of the reign of Aurangzeb. He wrote about his work: "I must add, that I have not relied on the knowledge of others; and I have spoken nothing which I have not seen or undergone..." but there are some very serious issues regarding the veracity of his work as explained in section that follows below. Controversy Manucci spent almost his entire life in India. He would then send home the manuscript for "Storia do Mogor" which was lent to the French historian François Catrou in 1707. Catrou wrote an another version as ‘Histoire générale de l’empire du Mogul’ in 1715. The original then emerged in Berlin in 1915 and was written in three different languages. This version was translated and then published. Among those who have doubted Manucci's authenticity are the famous British historian Stanley Lane-Poole and Ali Sadiq. There are some popular events that are so misinterpreted that it is very hard to believe in the veracity of this authors work especially his work "Storia do Mogor". Some major examples are: On page 120 on this book, Manucci writes that Akbar (3rd mughal ruler) was born in Persia. It is a very well known fact that has been confirmed by many independent authors that Akbar was born in Sind and not Persia. On page 122 Manucci writes about the confrontation between Chand Bibi (regent of Bijapur) and Akbar. It is mentioned by Manucci that Akbar forces defeated Chand Bibi's forces and Akbar fell in love with her and moved her to his own palace. This event is again wrongly portrayed by Manucci, Akbar forces were able to defeat Chand Bibi's forces (they lost once) but Chand Bibi was in fact killed by her own troops and never by Akbar (almost all historians agree on this). Again on page 123 comes a completely flawed story about Akbar. Manucci mentioned that Akbar forces attacked Chittor fort and by deceit Akbar took 'Jaimal' a prisoner and asked his wife 'Rani Padmini' to marry Akbar and join his harem or else he will kill Jaimal. Then Manucci expounds in great detail about how Rani Padmini played a trick on Akbar and assured the release of his husband Jaimal (Jai Mall) from Akbars fort. While this event is true but it completely out of time. This event happened in early 1300 AD, almost 250 years before Akbar was born or 350 years before Manucci was born. It was Alauddin khilji, sultan (king) of Delhi at that time who attacked chittor and not Akbar. Rana Rattan Singh was husband of Padmini while Manucci writes Padmini's husband as Jaimal, it should be noted here that Jaimal was commander of Chittor forces in 1567 battle. This incident is widely recorded in Indian history through many paintings and writings and there is not even an iota of doubt that Manucci's work here is not representing history correctly. There are numerous other incidents in this book which are completely flawed, this raises very big concerns about the veracity of Manucci's work, especially his writings about initial mughal rules Humayun, Babar and Akbar. Further reading Manucci, Niccolao, Storia do Mogor, Eng. trs. by W. Irvine, 4 vols. Hohn Murray, London 1906. Lal, K.S. (1988). The Mughal Harem. New Delhi: Aditya Prakashan. ISBN 978-81-85179-03-2. Lane-Pool, Stanley. Aurangzeb and the decay of the Mughal empire (Delhi: S. Chand & Co.1964) Ali, Sadiq. A vindication of Aurangzeb in two parts (Calcutta: New Age Press. 1918) Source: http://bit.ly/w06hHD