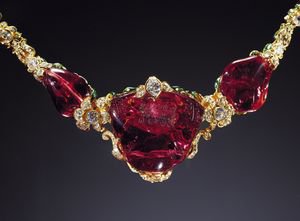 While the most celebrated gem from the Lahore Treasury, the Koh-i-nűr diamond, came directly to Queen Victoria from India in 1850, other significant jewels remained with the East India Company until the conclusion of the Great Exhibition, where they had been shown to considerable acclaim in the Indian section. In recognition of the Queen’s patronage of the Exhibition, the Directors of the Company presented her with a magnificent selection of stones, of which the ‘wonderful’ rubies ‘cabochons, unset, but pierced’ particularly struck her: ‘one is the largest in the world, therefore even more remarkable than the Koh-i-noor’. This, the so-called Timur Ruby, which weighs 352.5 carats, together with three smaller stones - all of which are actually spinels rather than rubies - were set by Garrards into a new necklace of Oriental inspiration in April 1853. In June of the same year the necklace was adapted so that the re-cut Koh-i-nűr could occasionally take the place of the Timur Ruby; and in 1858 three of the five pendant diamonds originally attached to the centre of the necklace were made detachable for alternative use, two as earrings and the central pendant (the Lahore Diamond) as the centre of the Coronation Necklace.

The history of the stone, with its illustrious provenance from the Mughal Emperors Jahangir, Shah Jahan, Aurangzeb and Farrukhsiyar, and the Persian rulers Nadir Shah and Ahmad Shah, is partly recorded in inscriptions dating between 1612 and 1771 on the stone itself. The connection with the great Asian conqueror Timur (1336-1408), which arose from a misreading in the early twentieth century of one of the inscriptions, has recently been reconsidered, and it is now thought possible that Nadir Shah, who looted the stone from the imperial treasury in Delhi in February 1739, may have placed his inscription over an erased inscription proclaiming Timur’s ownership.